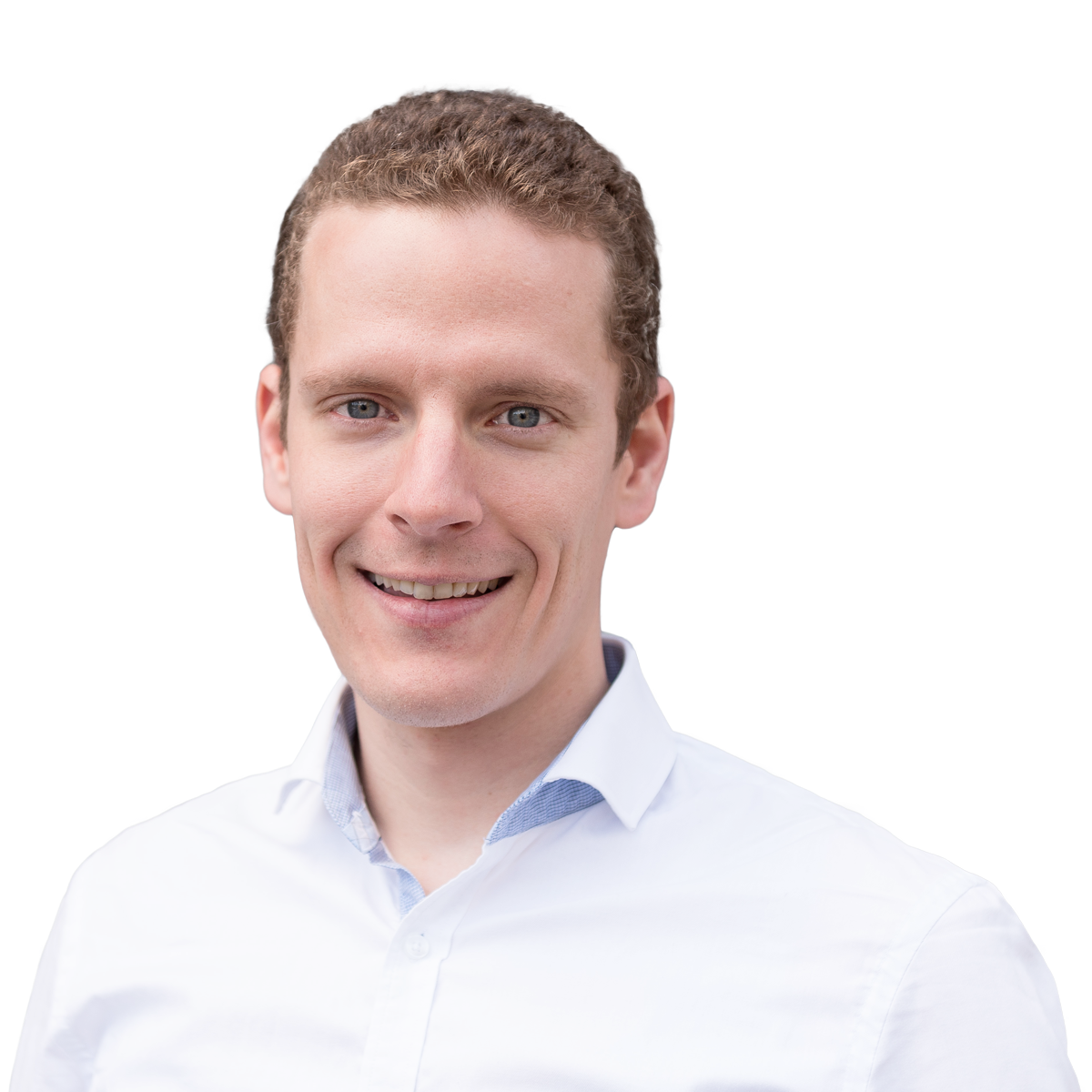 What’s Django all about?

Django is a free and open source python based web framework. Django is an opinionated framework, which enables you to create websites and web applications from an existing code base and ready-to-go components, rather than from scratch, which makes development quicker and easier. Built with front-end developers in mind, it is highly flexible, which can save a lot of headaches.

Django is one of the top three open source web technology ecosystems, due to its flexibility, integrated CMS and scalability.

How do you know it’s one of the best?

In the following table, we compare some of the most well-known frameworks against Django to see who comes out on top

What about other frameworks?

What is the CMS situation in comparison to the web framework that is currently the most hyped (Laravel)? Bottom line: Laravel is a great PHP web framework but it lacks an enterprise level Content Management System (CMS). The closest CMS is Drupal, which, from a technical perspective, is closest to Laravel (even though not based on it, so the integration is not easy, despite both being created in PHP).  Drupal shows up as most dreaded technology on Stackoverflow. 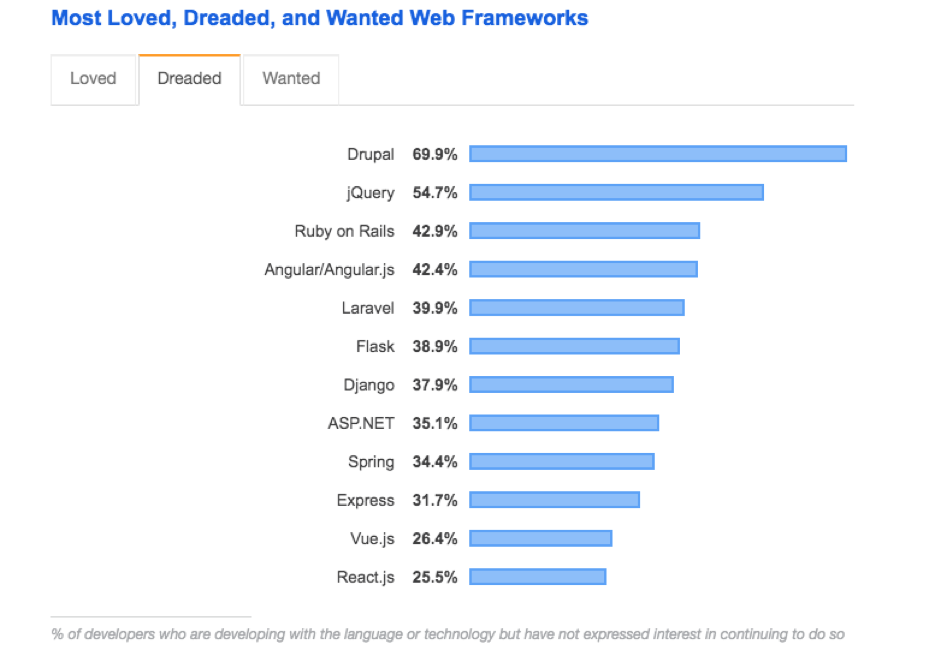 So, what are the main benefits of Django?

Community plays a bit part in ensuring the smooth development of a project. Django has a strong and ever evolving community behind it, and because it’s open source, this means there’s thousands of users contributing code to the framework. This helps you save time and money, as you can reuse existing code for free. This also helps with scalability and ensuring code is always up to date and evolving.

Django is supported by the Django Software Foundation, who provide a centralised governance around its development and long term roadmap. In addition to steering the direction of the project and maintaining the ecosystem, the Django development team provide long-term support releases, meaning organisations can safely and confidently build with Django, with the assurance of regular and on-going improvements.

As well as this, Django provides a huge number of tutorials and documentation, making it easy to get started and troubleshoot problems.

See how Django has risen within the community since 2008: 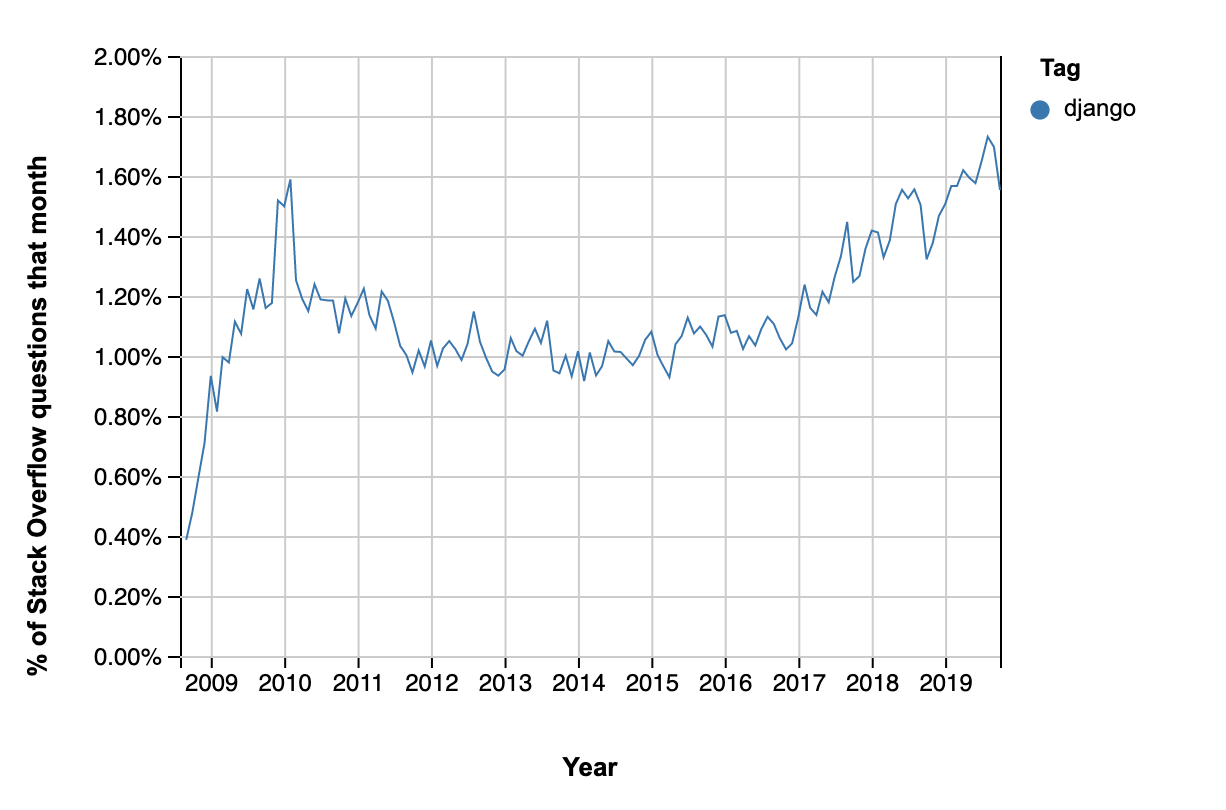 Django has a well established ready-made CMS in-built into the framework. This means there is less need to integrate a new module, which could be time consuming and difficult to integrate.

The Django CMS is simple to use, with an intuitive drag and drop interface, and is by default built around the needs of multilingual websites – making it easy to build a website in multiple languages. The CMS makes it easy for content managers, editors and website admins to update the website without the need for a developer.

The Django CMS makes extensive use of the Django add-on paradigm, allowing functionality to be easily added and made available to content creators. Addon authors can readily share their addons which can be tailored and customed as required through the Django CMS marketplace.

Long term support releases have helped the Django CMS to gain popularity, with many leading enterprise organisations using this framework:

When building a website, security is important. With different hacks and scams out there, it can be difficult to know how to make your website secure. Luckily, Django provides state-of-the-art security features that are enabled by default, adn are intended to encourage secure-by-default web app development. Some of these basic security measures include

According to a survey undertaken by Stack Overflow, Python, the language used by Django, was ranked as the second most loved technology by developers (73.1%) and ranked first in the most wanted language to learn with 25.7%.

In 2019 it was voted the most wanted language for a third year in a row, meaning developers who do not yet use it want to learn it.

Python is a long lasting language, and is continuing to grow. This means that there is easier access to resources and community, providing useful support. There are also great tools that come with Python for debugging, making it simple to handle any issues that arise.

Will it continue to be popular? 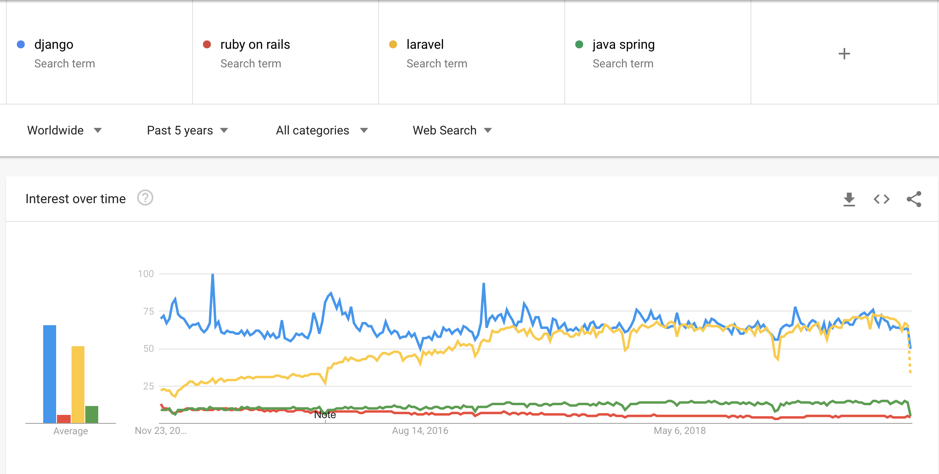 Django has consistently been the highest and most popular search term when comparing against the other frameworks over the past five years.

Who else uses Django?

There are many large and well-known companies who use the Django framework. Below are just a few

If you’re interested in seeing how we can help you build a website on Django, simply get in touch with us and we’ll be happy to help.